I’m not sure why it took me so long to decide to book myself in for a reiki session. Thinking of all of the negative influences and situations which have manifested themselves from the start of the year, it should have been obvious. From chickpox pox, to cellulitis, to broken legs and various coughs and sniffles, things started off pretty badly for my family in 2014.

That said, besides my week of sitting on the sofa, my mind was still in tact and the frustrations around me were not really driving me to dispair (where they would have previously).

During my time on the sofa, I had a fair bit of time on my own to reflect about a great many things. One of the key things was the recollection of last summer, a time when I truly began my quest for personal resilience, “other worldly” knowledge and enlightenment. On the subject of resilience, we now have a ‘Resilience Programme’ in work, which has been launched to tackle workplace stress and actively getting staff to ‘Be Well’. I recall it was during a presentation last year in front of some quite senior staff, that my personal resilience was shared with othersd, in that I expressed that my resilience was very strong as I often used yoga, meditation and reiki to combat stress and bring me as a person inner peace, not afraid of being called a woo woo at all through the meeting.

Recently, I have been craving to have those feelings again, the feelings I had last year. During my armchair isolation, I tried to look for meditation groups in my area, and had some success.

Looking back at my ‘year in yoga’, I had convinced myself that of the two sections of each class (the first hour being postures and the last fifteen minutes being relaxation and meditation – including a six week course in autogenics), I missed the meditation part the most. I guess the rationale for this was that although the postures were no doubt great for the body, it came second to the fact the meditation could actually one day lead to enlightenment, which was my ultimate goal.

So there it was, scribbled on the calendar for the 10th February, that I would attend my first Buddhist Meditation session. I wasn’t sure what to expect, and although there were some pearls of wisdom shared, it wasn’t really what I as looking for. Two ten minute seated and fully clothed (coats, scarves and hiking boots) meditation sections either side of a one hour talk didn’t really do it for me. I came to the conclusion that what I was really looking for was a ‘new age school’, a group of like-minded individuals interested in meditation, alternative thinking / theories and eventually, enlightenment (in whatever way shape or form that would take), who would meet up regularly to discuss matters universal and share thoughts and energy (via reiki).

Sometimes one can look too hard for something and when one takes a step back to focus, all becomes clear. Not long after I got back to the house after my one and only trip to the Buddhist Centre, I messaged my reiki master (“L”) and asked her if there were any sessions available. My message was responded to almost instantly and almost instantly I was booked in for a session in one weeks time. I had never had a one-to-one reiki session before, and although I was pretty sure what it was about, I was still a little in the dark on how proceedings would go.

After spending a hectic day in the Trafford Centre with the kids, I dropped everyone off at house and made my way over for my session. In the message that “L” sent before I left the house, she had said that if I was willing, that she was going to start me off on the Reiki Level 2, which involved her attuning me to the reiki power symbols rather than just a normal session. I said yes, although there was a part of me which thought it was a little fraudulent as I’ve not really had much focus or time to do reiki of late. That said, if it gave me a Super Mario “Power-Up” then I wasn’t going to complain.

I got to “L”s house around 6.30 and as was met as usual with a Cheshire cat smile. She is probably one of the most positive people I’ve ever met and incredibly easy to get on with and share information and emotions. It’s no surprise that she is also a life coach and a bloody good one too.

I’d not seen “L” since we last had a reiki share at her house, which involved the both of us and also my wife. That was a cool night, as we talked for hours of life and shared many experiences, and laughed how one common element of negativity was shared by all three of us. We then had a shared reiki experience, during which “L” had said there was something in my right leg. Not to my knowledge. Not to my knowledge then should I add. It was not too long after the reiki share that I developed cellulitis, in the very same leg she predicted that I had a blockage on.

We got chatting about our experiences since we last met and I shared that over the last couple of months I had started to do some research on new age theories, consciousness studies and the likes. I mentioned that I had also been watching a lot of films of late (Eternal Sunshine of a Spotless Mind, Inception, Donnie Darko, The Matrix etc) and expressed my personal view (shared by millions no doubt) that there are key messages in these films. Key moments of truth which are unseen by the docile masses. She agreed.

“L” mentioned that when we meditate and self treat reiki, we become much less aware of the ego (conscious state) and more open to both our super-conscious (higher self) and subconscious states. It is whilst in the medation zone that we are able to to relax, tap into the invisible enrgies of the cosmos and tackle those feelings of fear.

She also mentioned something quite special. She said that when she was younger she had had a moment of enlightenment whilst in a group hypnotic session, and explained that for a time she didn’t feel anything, and then all of a sudden she saw and experienced something quite remarkable. A bright vision, a warm place, full to the brim with love and positivity. She recalled that she saw glimmering symbols and shapes she could not subsequently describe. She also mentioned the time dilation factor (which I have been reading about a lot), in that she was only out of the ego/conscious state for a split second, but whilst in the “other place” was gone for minutes, hours even.

After almost and hour and a half of talking, I popped myself up on the table and closed my eyes and relaxed into the accompanyting music as she did her thing. The feeling I felt during Reiki Level 1 was incredibly intense, I would describe this session as more maturing and subtle, rather than lightning bolts. One thing I did note (and we smiled about it afterwards) was flaring nostrils. For some reason, during the entire session, my nostrils were flapping like the Jupiter Mining Corps’ Chief Chief Chicken Soup Dispenser Technician Arnold J Rimmer. I asked “L” afterwards and she said she didn’t notice but would look out for it next time for sure!

I recall her drawing symbols on my hands and then moving my hands, palmed, into various positions like she did during the Level 1 attunement. In all I was very relaxed, felt some real energies throughout, and felt so sleepy afterwards.

“L” said she saw visions of a shepherd whilst treating me, symbolic of my current strong relationship with my two boys, perhaps in some way a dichotomous position to my own.

After the session, we sat down and she said that I would need a further two sessions to become fully attuned to the symbols of Level 2, and for the time being she would share the first with me and give instructions on how to use it. I took a little double take when she drew it out on paper, as the symbol itself reminded my of the direction and spinning nature of Leonardo Di Caprio’s totem in Inception (something we had discussed not an hour ealier), but even more coincidentally that two of the said totems had turned up on my doorstep earlier in the day from China, a purchase I’d made for my son and I two weeks earlier. 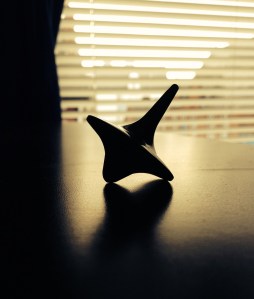 I thanked her for the session, booked myself in for a follow up and off I went, now super charged if not ready for bed.

That night I dreamt I was in a hippy commune, with a David Koresh type character taking charge of the proceedings. It was a rather posh hippy commune though, as we appeared to be sat on a grassy knoll with a hugh stately manor as a backdrop. I recall being dressed in Woodstock hippy garb, very floral and far out, surrounded by likeminded space cadets. As “he” began to speak as someone next to me passed me something to smoke, which he said contained DMT (DiMenthylTryptamine) and that I should try some. As I did then dream faded and I awoke. Or did I….