A reiki share does exactly what it says on the tin. It is an opportunity for reiki practitioners of all levels to get together and discuss their recent experiences and  post-attunement consolidation. The last three months have been really busy for me, intense period in work, renewing my wedding vows in Las Vegas, on the hunt for a new job and taking up new hobbies in Standup Paddle Boarding (SUP), which involves standing up on a modified surfboard and paddling with a long oar through the water, and Land Standup Paddle Boarding, (Land SUP) which involves standing up on a longboard (four foot long skateboard in my case) and propelling yourself along the road/pavement a long oar with a rubber foot on the end.

As is the way with a life of constantly competing priorities, little time has been afforded for the practice of reiki in the usual sense. I’m still on “me-mode” with reiki and probably will be for quite some time to come, but what I have now put in place I think is rather special. I started of discussing combing reiki, meditation and yoga into one holistic approach to well being recently with “L” (my reiki mistress), and decided in the little spare time that I had to create my own technique which involves all three disciplines. OK this may well have been done before, but as a person who likes structure, I’ve not seen any guides out there which combines all three into one. And so I did, the output of my outpourings resulted in a forty-five page guide which I have had reviewed by several people (including reiki masters and holistic therapists) all of who think it’s pretty special. Now that it’s out there (far out…), all I need to do now is to set up sessions on the beach near to where I live and practice what I preach (or is it teach…).

And so to last night’s reiki share. I was due to be in attendance with my significant other, my now wife for the second time, but she has been feeling stressed of late with college work and although I tried to convince her that in itself it was a sign to go, my powers of reasoning fell short and off I went alone.

Armed with only two Lego figures and a pair of socks, I set off for “L”s house and put on Track Nine of Weather Systems by Anathema, a song worthy of any reiki warm up and warm down. Whilst I’m on the subject of Lego (and believe me that had a really key part to play last night which will be revealed shortly), I have recently been looking at Pinterest for ideas for a number of things, my next tattoo (which is this Saturday), making craft items from driftwood I find on the beach, and ideas for Lego creations when I have lost afternoons with my daughter and son, spent building cool stuff from  “fake plastic briquettes”. On browsing, I saw some photos of a Lego character with a hat and a camera, caught in the moment on DSLR (for example, the Lego camera guy taking a picture of another Lego character who has just slipped over on a banana). These pictures looked awesome and gave me the idea to create an alter-ego for myself made from Lego. And so YogaMike was born. The name itself came from “L” herself originally; when I was attuned almost a year ago now, there were two Mikes in the room, one was renamed DrummerMike and myself YogaMike. So wherever I go now, YogaMike comes with me as you can see below (New Brighton, UK; London, UK; Hoover Dam, USA): 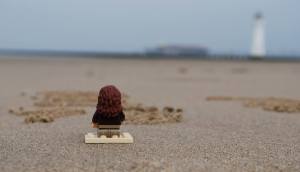 Upon entering the “Buddhist boudoir” I was greeted by “L” with a beaming smile as per usual, as well as three new recruits, “S”, “K” and “J”, all seemed really nice. They had recently been through their Level One attunement and started off the session by sharing their experiences since then. “S” seemed to have done the most consolidation, and shared a nice tale about how she “resurrected” a butterfly at the side of the road, where she saw it lifeless and on its side, so she carefully picked it up and gave it reiki in her closed and cupped hands, after a time she felt it running around. She opened her hands and there it was upright and awake, after which she placed it on a nearby bush and went on her way. She also shared that her husband went for a job interview recently and beforehand he was really stressed so she gave him reiki the night before to calm him down and ease the load on him. He got the job. I asked her for some magic my way as I find out by next Monday if I have got the job that I have applied for recently. On that, I had a really strange dream last night that I was working in Cape Town, not the Cape Town I have seen from photographs, but Cape Town nonetheless, the exact location my potential future boss is located, I have recently found out.

“K” and “J” said that they had had a dabble but nothing really significant to date, quite like me in many ways I guess when I first started off. I then shared my journey to date with all in the room, from the dark days of two years ago, on through the turbulence and out into the light. I shared that reiki comes in many ways, not just the structured way in which “L” conducts her therapy-like sessions. For me, it comes through me via meditation and yoga, for my SUP friend “J”, it comes through him when he is out on the waves cutting the surf, feeling the kinetics of the tides and the lunar energy pulls of the moon.

I was first up on the bed for reiki, and all four ladies assumed various positions. The session was good, feeling a surge in energy through “K” through my crown and anja chakras, a churning in my core from “S” and an intense heat in my knees from “J”.

Next up was “S”. I adopted the feet position and quickly drew the power symbol before commencing. I have never really got anything from feet or legs (most of my intense experiences have come from the crown/third eye or the heart chakra). About half way through the session I felt a huge surge of energy coming from the soles of “S”s feet, so much so I had to open my eyes and take a step back. I saw “L” smiling as I did, who acknowledged what was going on too, so I grounded myself (something I had forgotten to do at the start) and went back into the soles (or was it souls) of her feet to finish off what I had identified.

I shared with her (when it was my turn to do so) my experience and she told the group that she had recently had a foot injury, something she had not shared with anyone in the room, which for me was a little shocking as that was really the first time I had picked up on a physical ailment, unknowingly.

“K” and “J” subsequently assumed the position on the bed, with only minor energy fluctuations reflecting in and from me. “L” closed the session and as we chatted for a while before we departed, I sneakily place a Lego figurine behind her on the side table and as I stepped through the door, I told her there was a present for “P” (her partner) behind her. I uploaded a picture on Facebook of the said plastic man and “P” declared his interest in securing it to the dashboard of his works van, and after seeing it she laughed out loud and said he would be made up with it.

“J” stayed behind and “S” and I walked down the path to our respective cars. I turned to her and asked her how it was she injured her foot, and to my complete and utter shock, she said she had injured her foot on one of her kids’ Lego briquettes. Now that is too spooky…