I see the value in living with less. Everything I now own (with the exception of family items like TV’s etc) can be found in my triple wardrobe. All clothes, shoes, bags and gizmos can fit inside a solitary piece of IKEA furniture and I like it.

However, if you took a side swipe to the right and my wife’s wardrobe, chest of drawers, bedside table and under the bed space, that revealed a very different picture.

She came home from work a few weeks ago to see her bedroom rather tidy and rather roomy. My bedside table was missing. My chest of drawers was missing. All of the items previously on top of wardrobes were missing. She smiled and I knew in that split second that without explaining to her anything about minimalism, I had a fair to medium chance of persuading her to do likewise, and likewise (albeit to a lesser extent) she did.

I took a further side swipe to the further right and opened my daughters bedroom door on Monday morning which revealed (to me at least) total and utter chaos. As I have been travelling around our “little blue dot” for the last seven months, I have accrued a lot of annual leave so for the next two months I will not have to work any Monday mornings or Friday afternoons.

My goal over the coming eight weeks is to minimalise the house, decluttering and touching up the paintwork as I go.

As with all miniature princesses, my daughter has accrued a lot of stuff of the course of her nine year existence and previous attempts to cull teddies and dollies have been met with a river of infants tears.

So this time, I tried a different approach. She came home from school on Monday and I beckoned her into the office / dining room and sat her down. I asked her what she thought of my new bedroom and she said she liked it a lot. I then got out my scrap pad and pen and drew the following: 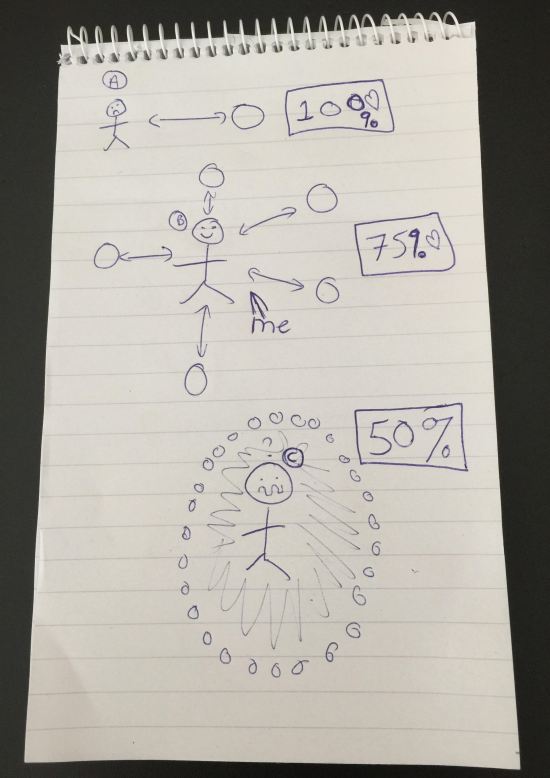 This was my attempt at minimalism for children. Kid A (nice reference for all you Radiohead fans out there) was unhappy, she only had one toy in the world and could only have so much fun with a single item, but she loved that toy more than any “thing” in the world, 100% in fact.

Kid B had a larger number of toys than Kid A and was happy, although she did not play with everything at all times, she did play with them all from time to time and loves them all, 75% each in fact (with “Blanky” still firmly rooted at 100%).

Kid C had way too much, box upon box of dusty dolls, tired teddies and very bored board games. She only played with half of the stuff and didn’t really need all of the things she had, so she only really played with and loved a smaller amount, 50% in fact.

So after explaining all of this to her, I turned to look at her and her eyes were filling up, chin quivering. She said that I was going to throw all of her toys away so that she would become Kid A. Not so I said, all I was trying to say was lets go upstairs and see if she was Kid B or Kid C (and in truth she was at that point somewhere in the middle).

So we spent the next couple of hours evaluating the love for each toy and whether it could either go in the bin or to the charity shop.

After what seemed like an eternity and three bin bags later, I moved my old chest of drawers into her room (replacing her untidy toy box bookshelf) and placed all of the loved items in each drawer, the room looking tidy and minimalist.