Waking to the chimes of Elegia by New Order is replaced today with the chides from my inner dialogue aiming directly towards the West Country folks on the next pitch who decide to continue unabated with the excessive noise levels of the previous evening. Whilst slightly annoyed, it does at least give me the get-up-and-go to get up and go.

After donning the trusty boots that served me well the previous day, I walk towards the lake and the morning dew on the grass gets to work on removing the mud from yesterday. The lake is shrouded in fine mist and is an eerie yet beautiful sight. I perch myself on a rock next to the lake and cease all thought processes, instead tuning in to the distant roar of flowing water, gulls swooping over the lake and the nearest snores of happy campers.

The call of nature kicks off my own call of nature and I make my way over to the toilet block noticing that the sun is rising over the distant hills to create biblical campfire in the sky, the early morning mist hanging like smoke in the air.

The condensation is heavy on the tent so we shake it off and pack it away in record speed. I love the simplicity of the Nova Two Hundred, up and down in minutes and only two kilograms to carry in the backpack, it will really come into its own when I go wild camping soon.

After the morning evacuations are over, we concur that the on-site toilet paper was akin to wiping ones ass on a velvet owl, so smooth was the experience, quite unlike the majority of other sites we have visited. With our gear safely packed away in the boot of the car and the day pack ready to roll, we drive off to our starting point for the day, Bethania, which sounds like a country within a country to me. Once the parking ticket had been stuck to the driver’s door, we dine on cereal bars and water and head across the road to the start of the Watkin Path, from which we will split off from to take the path to Yr Aran, which standing at 2452ft is Snowdonias’ forty-second highest mountain for those counting.

We have been to the summit of Snowdon three times before but I decide against that today as I want to start “bagging” the ninety-three “Furths” and “Hewitts” in Snowdonia. Luke has already taken the majority of the path we intend to take today as his DofE Gold Award took him through the ridge line which dissects Yr Aran and Allt Maenderyn.

As we start off on the path, I hear some fellow ramblers talking in Polish nearby (using several words I recognise from my many travels to Krakow) and the party leader makes his way over to me and asks for directions to the Llanberes path which is quite some distance away on the other side of Snowdon. I tell him that I think he is in the wrong place which gets lost in translation and after he asks for directions to “the big mountain” I show him the route up to Snowdon via the Watkin Path and off the party go. 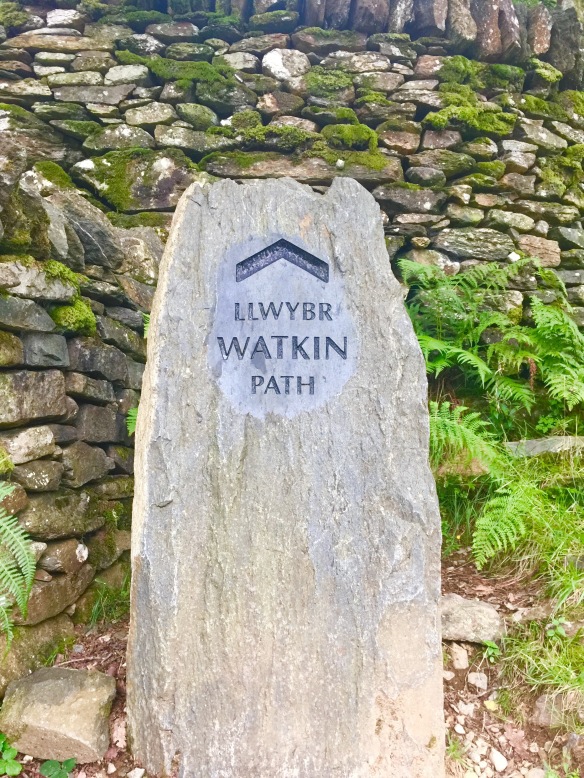 In terms of preparation for hiking (and I’m only a novice starting off) but there is too much preparation, the right preparation, not enough preparation and no preparation at all and our Polish walkers sadly fall into the latter, dressing in velour tracksuits and pink Converse will likely mean they will struggle ahead.

We cut the trail through the wood which opens out now so that we see the first views of Snowdon and the free-flowing water cascading down the hillside, noting that there will be plenty of opportunities to re-use the new water filtration system today.

We head off our Polish brethren at the pass and take a short cut across the grass and swampy area to leave them with their path and clean trainers and quickly reach the point at which we leave the Watkin Path and head for Yr Aran. A small path heads up slightly and we get our first glimpse of the peak in the distance, not only does it look far away but looks quite tricky too, but when proximity occurs such peaks very rarely are. 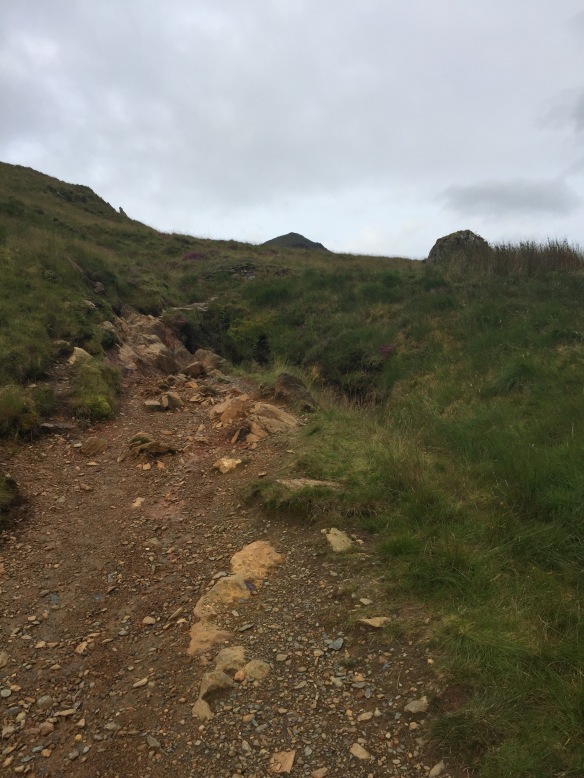 After a while we glance across at the Watkin and find no evidence to suggest that our Eastern European comrades have taken the trickier part of the path and presume that they have headed back down to the comfort of both the ride to Llanberes and the train up the mountain, where on board their choice of clothing for the day is absolutely welcomed.

We reach the ridge line and see that the way up Yr Aran isn’t as difficult as is looked from below.

We cross a few dry stone walls and circle around a small tarn and as we start our final ascent of the weekend, the wind starts whipping up. Thanks to the Uni Qlo down jacket my sudden onset of cold is banished and I beckon Luke to crack on, only he is now spent. The activities of yesterday, the hard slog across the pathless hillside to this point and having no requirement to bag Yr Aran today, he insists on sheltering from the wind which I dutifully nod to. I ask him to look after the backpack and throw the cars key on the top and head onward.

I guess like most peaks in Snowdonia, there are paths that pretty much take you to the top and Yr Aran is no exception to this. It takes about twenty minutes to peak the mountain and I take some well earned Haribo, sat strewn between a handful of soon-to-be woolly jumpers enjoying mid-morning breakfast of grass and more grass.

The view from the top is pretty good, the summit of Snowdon hidden from view by the clouds which makes it all the more mysterious as I’ve not seen it from this angle before. Off in the distance I see Llyn Gwynant where we started out this morning, a long way away now.

As is now customary, I take a small rock from the top of Yr Aran to add to my growing collection back home and make my way back to Luke and the backpack. The path down is often more taxing on the knees and legs and there is no exception here. I temporarily forget where I had left both son and bag and jog right past both of them them, thankfully I am “singing” one of the tracks from the latest Royal Blood album as I trot and Luke pops his head over the wall to holler and I stop and wait for him.

We retrace our steps back towards the Watkin and as we reach the path again we see a couple on a quad bike with three sheepdogs in tow. The lady alights and puts a whistle to her and the dogs sprint off to round up several stray sheep, with a particular plump one struggling to escape, possible and sadly ending up nestling under a heap of mint jelly later on in the day.

We reach the end of the path and with that, all cardiac activities cease for this weekend. Rather disappointingly, I end up with a bag full of plastic bottles collected on the way down (as I tend to do when I have space) from inconsiderate and accidental tourists.

With the car looming into sight as we make it back to the road, it hit me.

“That’s unfortunate isn’t it” Luke replies smugly, “I’ll wait in the cafe for you, can I have some money for a coffee?”.

“Believe this.” and he reaches into his pocket and pulls out the keys. The relief on my face must have been a picture, but I think it was a missed opportunity for him as if it was me, I’d have at least seen him take a few steps back up the mountain before the jangling took place.

We check back in at the Caffi Gwynant and successfully access the free wifi after several attempts of inputting the lengthy and complicated Welsh password and send our first message back home due to the total network blackout in the Beddgelert region.

I reflect on our first dedicated overnight hiking trip as we quaff some hot java and it has been a great trip for many reasons. The digital detoxification goes without saying, the test of the new equipment was a success and as for spending quality one-to-one time with Luke, priceless…