Over the past twelve months, we have all to some extent become fledgling virologists. Every news bulletin is presented in front of a large screen emblazoned with various Covid-19 info-graphics depicting how the virus attaches itself to the human cell, opens up a way in and infects the cell until the point where it is either extinguished by antibodies that the cell produces or it takes hold and kills its host, propagating and replicating.

Over the same time period, I have had some very interesting dinner table discussions with the family, and especially my nineteen year old son who is currently studying English Literature and Creative Writing at University.

He loves engaging in thought-provoking dialogue and I’m more than happy to deliberate and cogitate his musings and arguments and wade in with my opinions, so after re-watching Outbreak with Dustin Hoffman, my thoughts turned back to Covid-19 and the info-graphic depicted above on how the microscopic world of an individual cell and things attacking it could be viewed on a much larger scale and how humanity is self-creating real and credible threats to our very existence on Planet Earth, and how cause and effect is impacting our ecosystem.

My opening statement was that humanity (not unlike Agent Smith from The Matrix), is a virus that is attacking the very ecosystem it needs to survive. A virus is defined as “an agent that infects living organisms, often causing disease and death, which in itself is unable to replicate without a host”. Whilst I concede that Earth is may not be conscious (in the way that our brains are) and it does not have a sense or morality, when viewed as a single organism, it is living and can generate effects from the various causes imposed on it to protect itself from extinction. 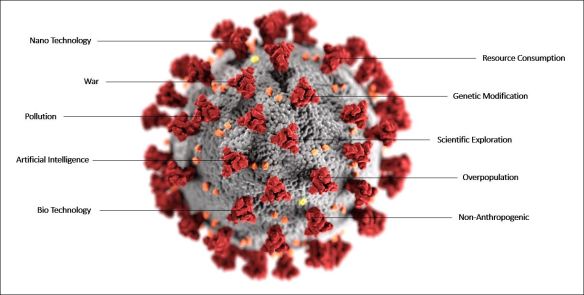 I took up my pen (converted to a jpeg for clarity) and drew a crude Covid-19 virus molecule and replaced each S-Protein nodule with each anthropogenic risk we are currently facing (adding a non-anthropogenic risk for good measure) and discussed each one at length:

The response to all of this from my “son-beyond-his years” was abrupt and to the point: